Skip to Main Content
It looks like you're using Internet Explorer 11 or older. This website works best with modern browsers such as the latest versions of Chrome, Firefox, Safari, and Edge. If you continue with this browser, you may see unexpected results.
Washington College of Law - Library Guides

Each of the tabs above provides links to information and key components about the UN International Law Commission. The links are principally from the ILC's official website. Explore its history, mission and work accomplishments. For additional resources, both online and in print, available at the Pence Law Library, click on the tab "Books about the ILC".

On 3 November, 2016, American University's Washington College of Law's Dean Emeritus Claudio Grossman was elected by the UN General Assembly to the International Law Commission for a five-year term (1 January 2017 to 31 December 2021). For information on Dean Emeritus Claudio Grossman, see his Faculty page at the Washington College of Law. For information on the ILC election process and its membership, see Members. 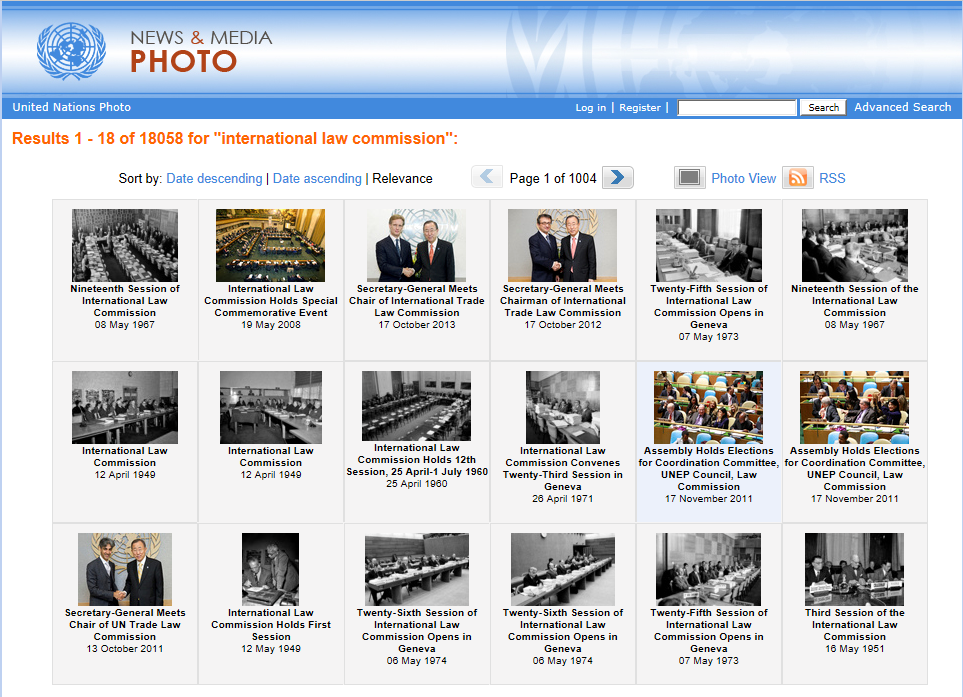 The UN Photos website includes many photos of the International Law Commission, from its earliest date to more recent occasions. 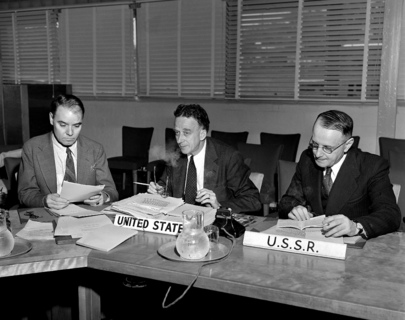 Committee on Progressive Development of International Law and its Codification 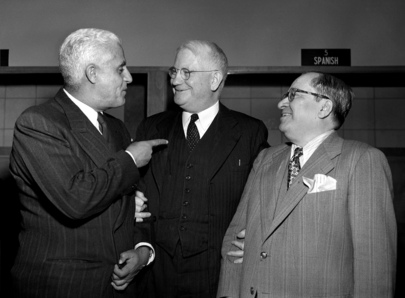 Justice Manly O. Hudson, United States, Chairman of the Commission (centre) is seen with two members of the Commission: Roberto Cordova of Mexico (left) and Ambassador Gilberto Amado of Brazil.

The Commission is considering a declaration on the rights and duties of States. 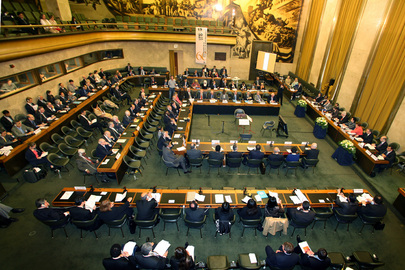 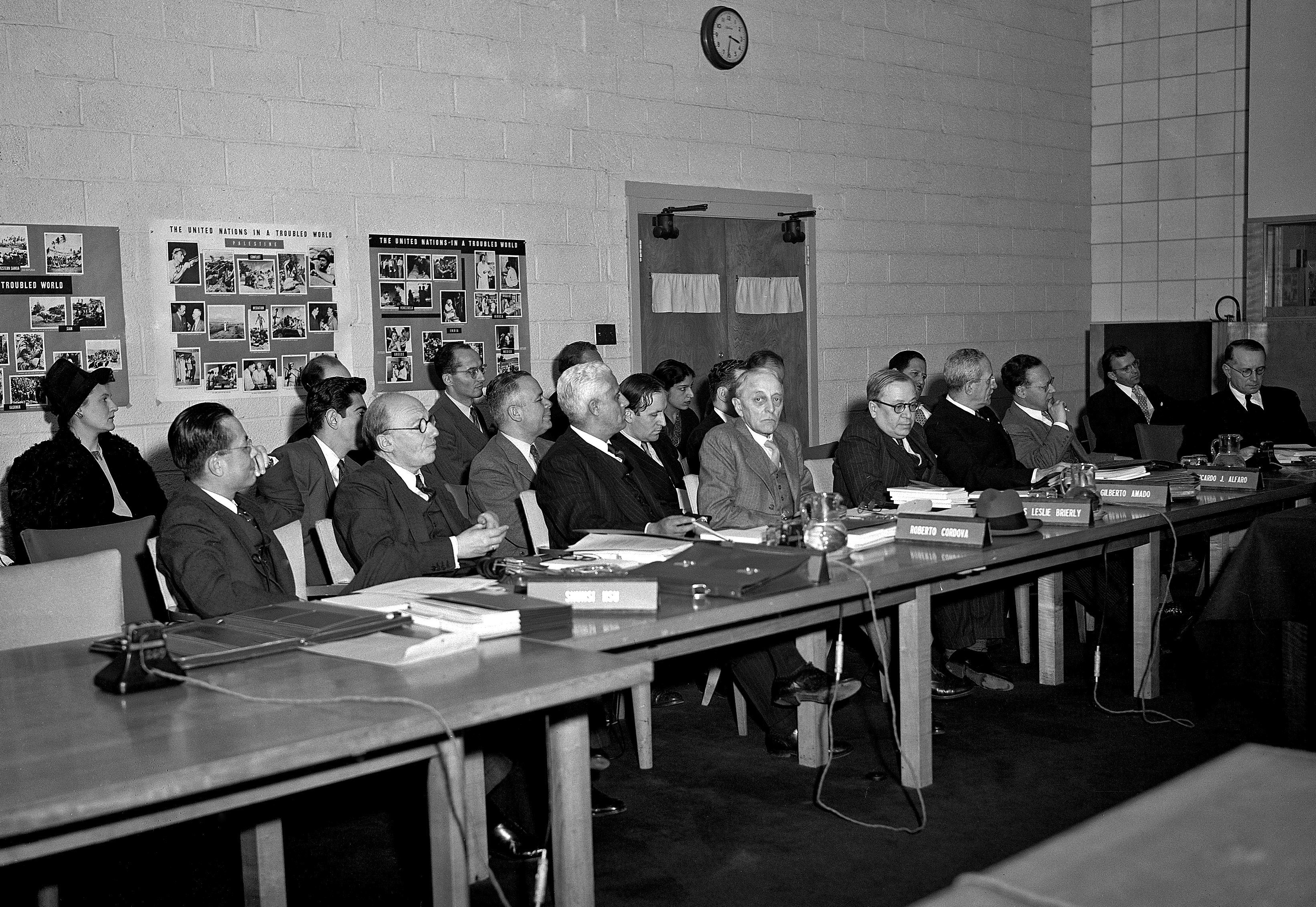 Partial view of the International Law Commission in session under the chairmanship of Professor Manley O. Hudson, United States, who was recently elected to this office.
Lake Success,New York
Photo # 176883 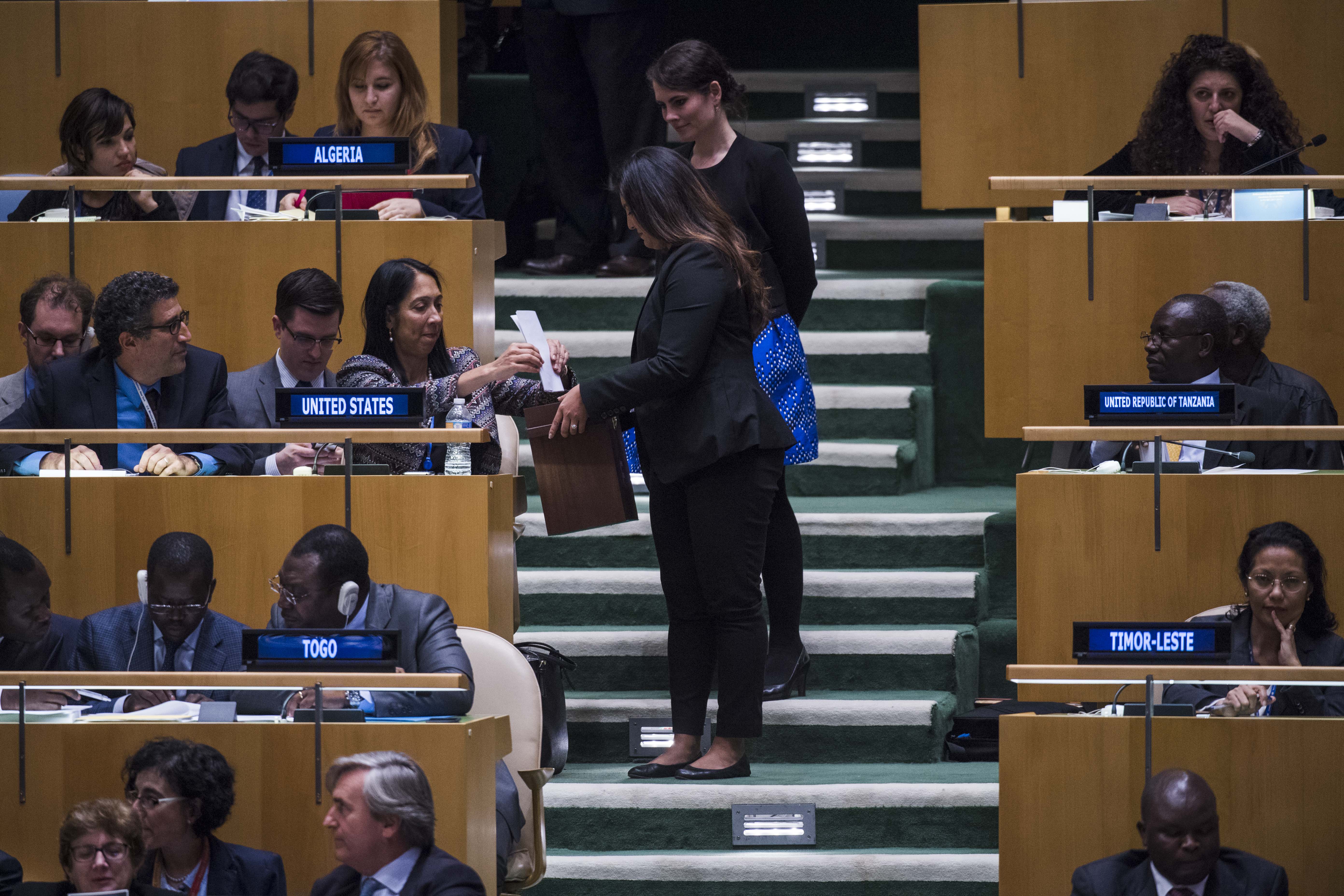 Voting by way of secret ballot, the General Assembly elected 34 members of the International Law Commission, the United Nations organ tasked with the progressive development of international law and its codification. The new members are to serve five-year terms of office with the Geneva-based body, beginning on 1 January 2017. They constitute eight nationals from African States; seven from Asia-Pacific States; four from Eastern European States; seven from Latin American and Caribbean States; and eight from Western European and Other States.

Chat Service is offered during Reference Desk hours, and is available to AU and WCL currently enrolled students, faculty and staff.

Privacy: Pence Law Library values confidentiality. We may save a copy of your chat session for research or educational purposes, but will remove all identifying information.

(The following information is from the ILC website, with links added).

The idea of developing international law through the restatement of existing rules or through the formulation of new rules is not of recent origin. In the last quarter of the eighteenth century Jeremy Bentham proposed a codification of the whole of international law, though in a utopian spirit.1 Since his time, numerous attempts at codification have been made by private individuals, by learned societies and by Governments.

Enthusiasm for the “codification movement” — the name sometimes given to such attempts — generally stems from the belief that written international law would remove the uncertainties of customary international law by filling existing gaps in the law, as well as by giving precision to abstract general principles whose practical application is not settled.

While it is true that only concrete texts accepted by Governments can directly constitute a body of written international law, private codification efforts, that is, the research and proposals put forward by various societies, institutions and individual writers, have also had a considerable effect on the development of international law. Particularly noteworthy are the various draft codes and proposals prepared by the Institut de Droit International, the International Law Association (both founded in 1873) and the Harvard Research in International Law * (established in 1927), which have facilitated the work of various diplomatic conferences convened to adopt general multilateral conventions of a law-making nature.2

(The following information is from the ILC website, with links added).

The intergovernmental effort to promote the codification and development of international law made a further important advance with the resolution of the Assembly of the League of Nations of 22 September 1924, envisaging the creation of a standing organ called the Committee of Experts for the Progressive Codification of International Law, which was to be composed so as to represent “the main forms of civilization and the principal legal systems of the world”.1 This Committee, consisting of seventeen experts, was to prepare a list of subjects “the regulation of which by international agreement” was most “desirable and realizable” and thereafter to examine the comments of Governments on this list and report on the questions which were “sufficiently ripe”, as well as on the procedure to be followed in preparing for conferences for their solution. This was the first attempt on a worldwide basis to codify and develop whole fields of international law rather than simply regulating individual and specific legal problems.

After certain consultations with Governments and the League Council, the Assembly decided, in 1927, to convene a diplomatic conference to codify three topics out of the five that had been considered to be “ripe for international agreement” by the Committee of Experts, namely: (1) nationality, (2) territorial waters and (3) the responsibility of States for damage done in their territory to the person or property of foreigners.2 The preparation of the conference was entrusted to a Preparatory Committee of five persons which was to draw up reports showing points of agreement or divergency which might serve as “bases of discussion”, but not to draw up draft conventions as had been proposed by the Committee of Experts.

Delegates from forty-seven Governments participated in the Codification Conference which met at The Hague from 13 March to 12 April 1930; but the only international instruments which resulted from its work were on the topic of nationality.3 The Conference was unable to adopt any conventions on the topics of territorial water or State responsibility. Although the Conference provisionally approved certain draft articles on territorial waters which later exerted influence to the extent that Governments accepted them as a statement of existing international law, it failed to adopt even a single recommendation on the subject of State responsibility.

No further experiment in codification was made by the League of Nations after 1930. But on 25 September 1931, the League Assembly adopted an important resolution on the procedure of codification, the main theme of which was the strengthening of the influence of Governments at every stage of the codification process.4 This underlying theme was subsequently incorporated in the Statute of the International Law Commission of the United Nations, together with certain other recommendations stated in the resolution, such as the preparation of draft conventions by an expert committee, and the close collaboration of international and national scientific institutes.

Current status of the work of the ILC

Current status of the work of the Commission and forthcoming deadlines